Return to the main site

El Monte Sagrado has always taken great pride in our cleanliness and will continue to improve the quality and standards for our guests during these times. Heritage Safe Escape reflects our enhanced cleaning procedures and personal protective equipment program to protect our guests and staff. 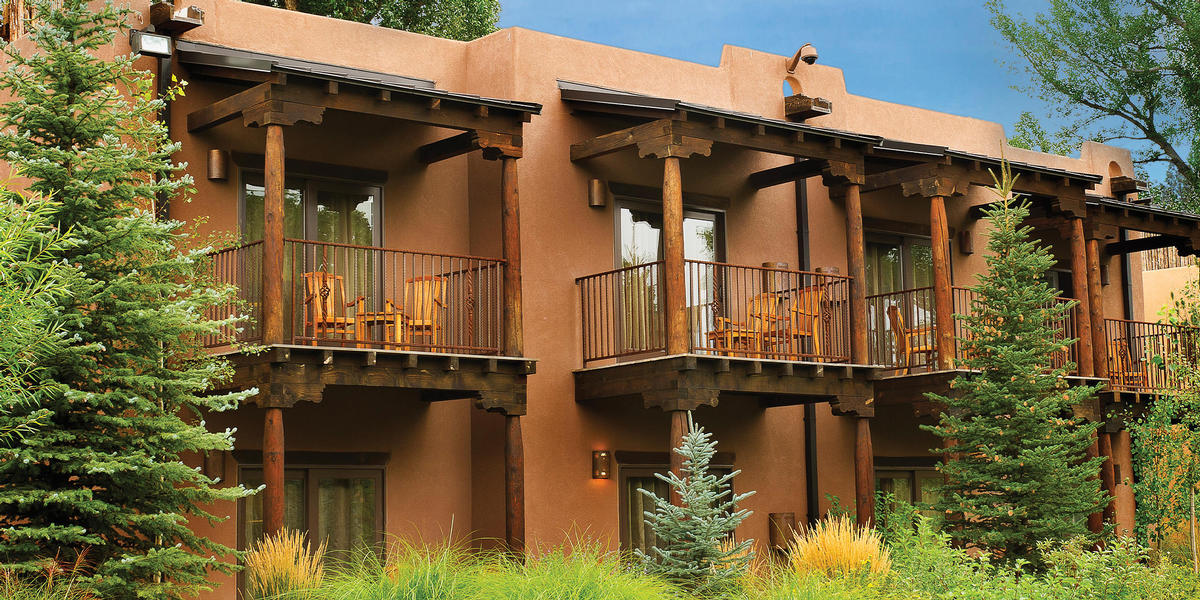 Heritage Hotels & Resorts has always taken great pride in our cleanliness and will continue to improve the quality and standards for our guests during these times. Heritage Safe Escape reflects our enhanced cleaning procedures and personal protective equipment program to protect our guests and staff.

Focus on limited contact - Heritage utilizes Blue Water Linen, a state of the art automated laundry facility. Our linens and terry are laundered through a 14 step cleaning system that sanitizes at the highest level in the industry

Enhanced disinfection in place across all spas, fitness centers, and high touch areas in public spaces and guest room spaces

Social distancing seating at restaurants, bars, meetings, and public spaces will be indicated for enhanced protection

Accessibility to sanitizing stations at entrances and high traffic areas

Prior to arrival, guests will be asked their personal preference on service interaction 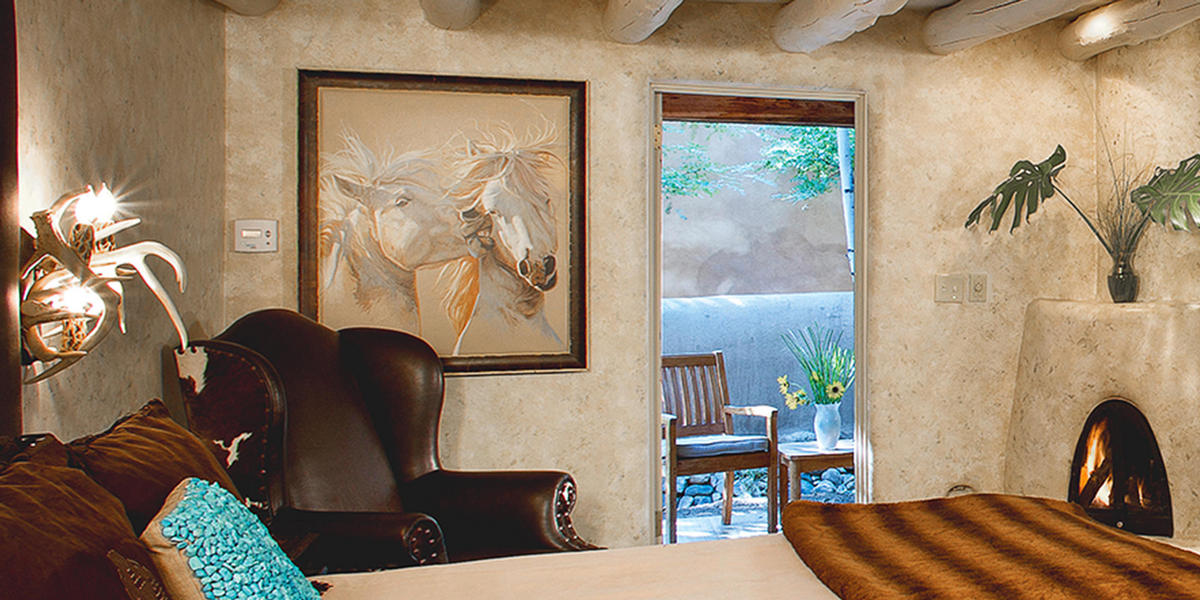 Whether you select one of our 48 Taos Mountain rooms, 18 Native American Suites, six historic Casitas, or one of our 12 luxurious Premiere or Global Suites, your stay at El Monte Sagrado will be an unforgettable experience.

Each Taos accommodation features two luxurious bedrooms, two resort bathrooms, and your own courtyard, along with spacious living and dining areas. These suites are perfect for two couples or a family sharing a larger space. 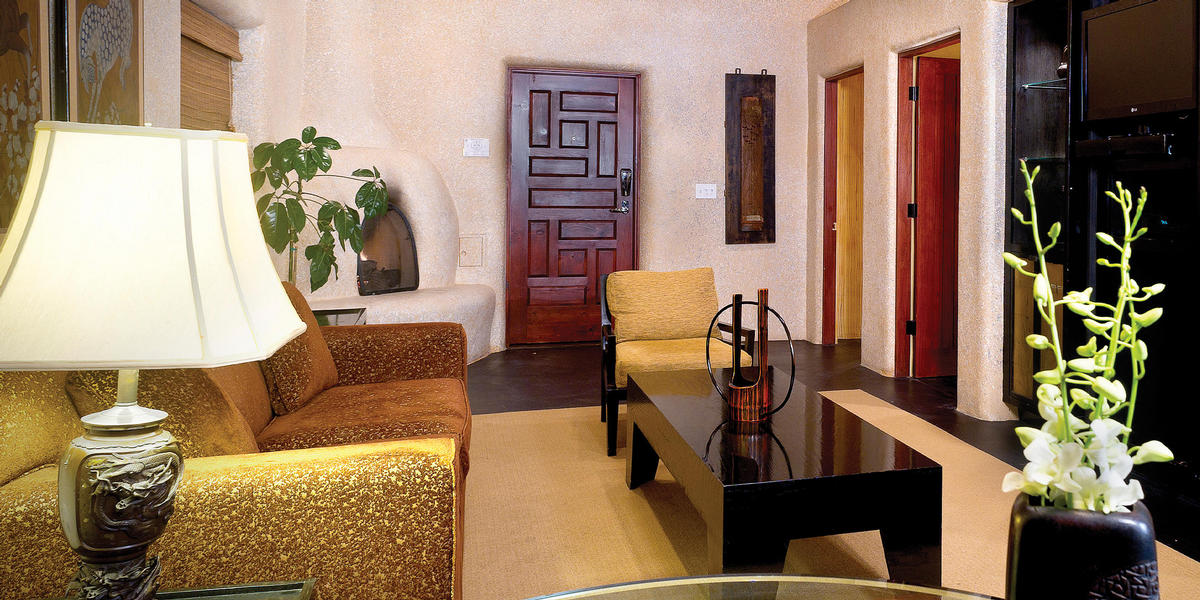 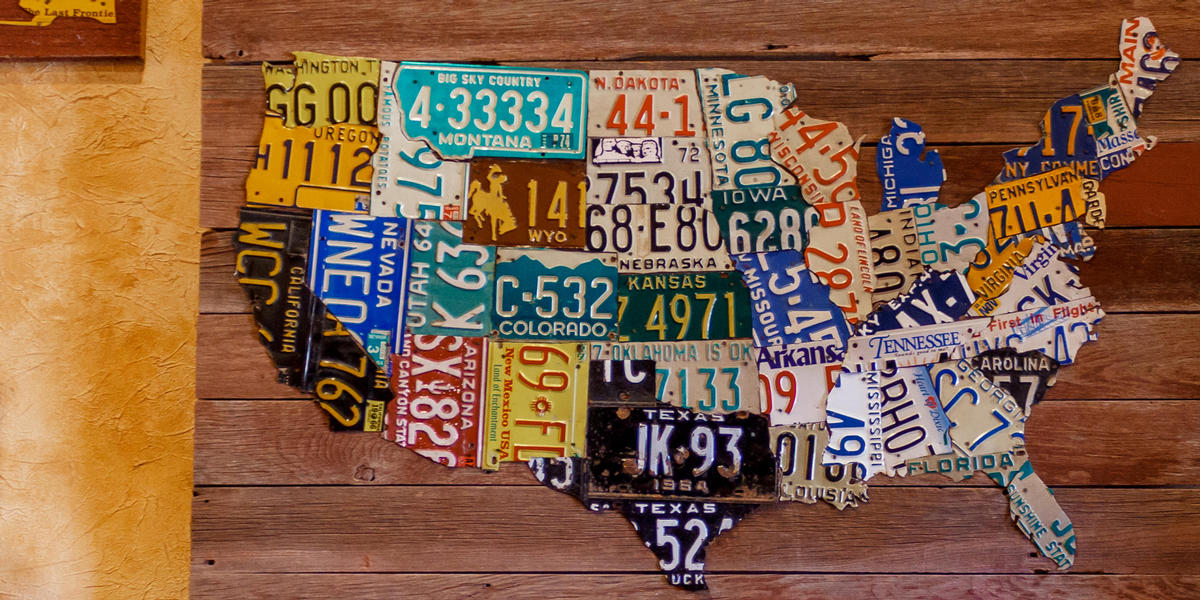 The first thing that you notice upon entering the space is the feeling of quiet serenity through the simplicity of design. The first bedroom has been uniquely treated to resemble a delicate Japanese shoji screen and is complemented by the adjoining bathroom’s stone finish. The second bedroom's walls were designed to give a feeling of bamboo achieved by using hand cut brushes. The bedroom next door was treated to a Japanese style watercolor mural of gentle sparrows gathering and gossiping in a stately pine tree. 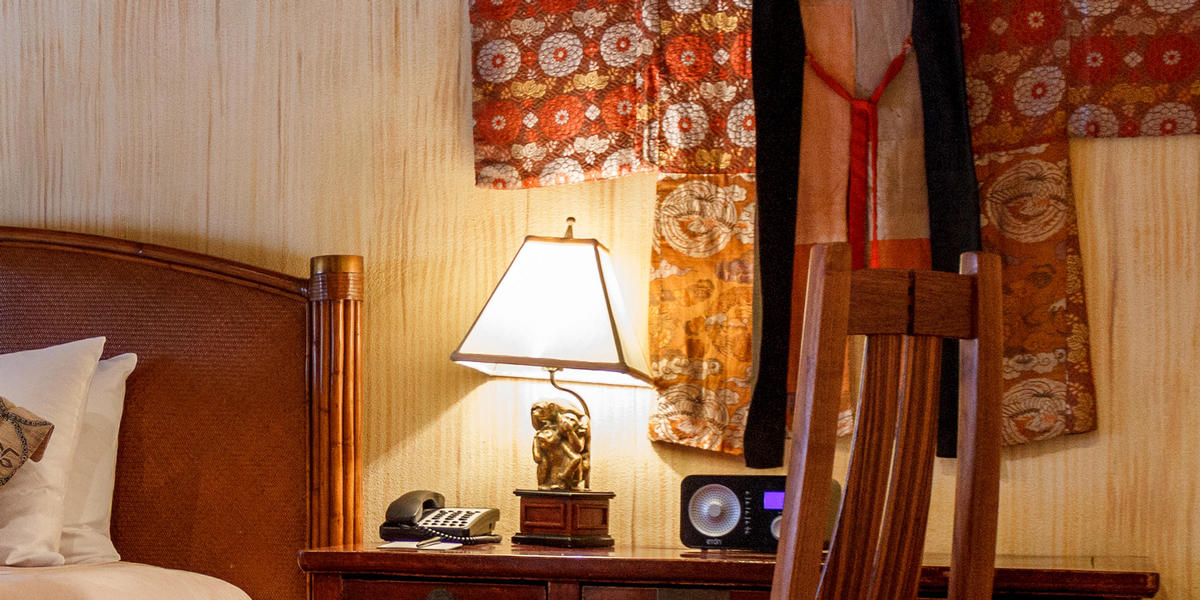 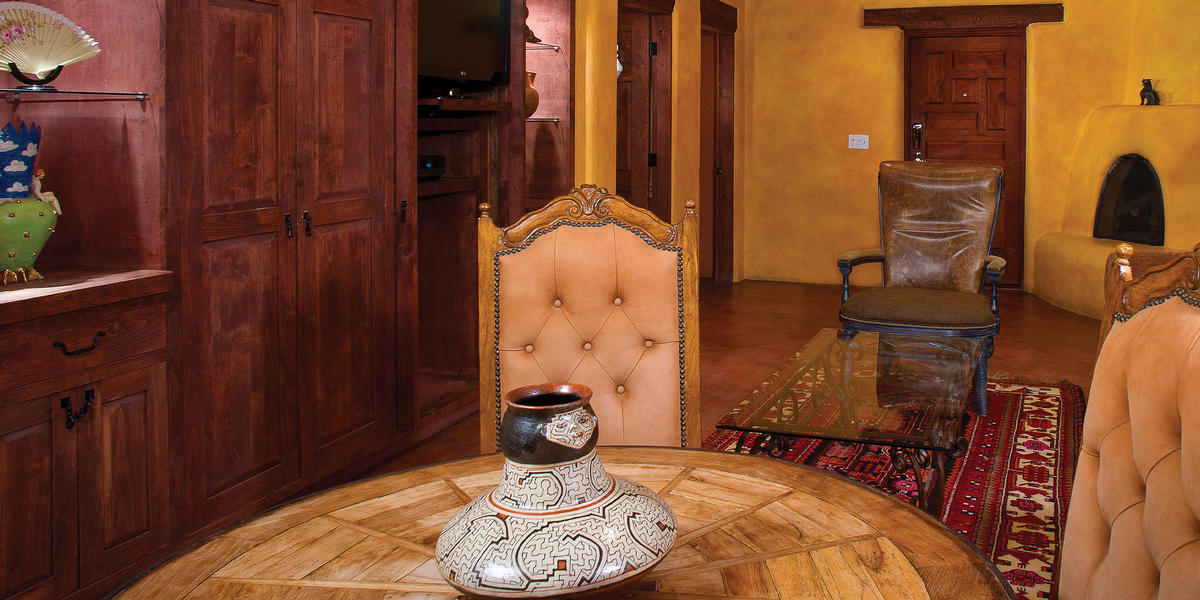 The mystifying and intense pulse of Flamenco and Goya’s inspired imagery merge with the traditional colonial ambiance in this lavish suite dedicated to Spain. Embroidered fabrics, wood carvings, beams, conch shell motifs, handmade rugs, and hand decorated walls bring out the spirit of the region. The first bedroom is regal and furnished with an elegant custom made, iron and wood king size bed, matching fixtures, and a stained wooden ceiling with heavy log beams. The second bedroom is lighter; a breezy light blue fills the room, with an ornately carved pine bed and matching nightstands and fixtures.

This suite has been designed to convey the Western United States and Texas. The walls have been carefully textured to resemble worn leather and match the unique tooled and stitched, fringed leather chairs. The master bedroom’s walls reflect raw hand hewn stone on a grand scale. The walls of the second bedroom pay homage to the cowboy culture. 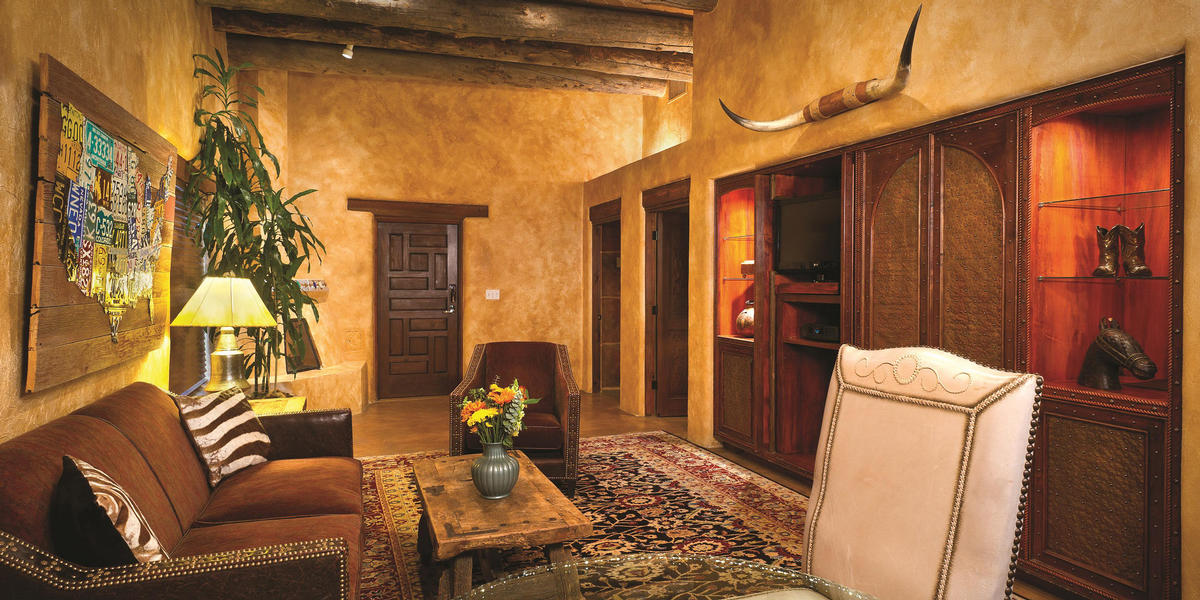 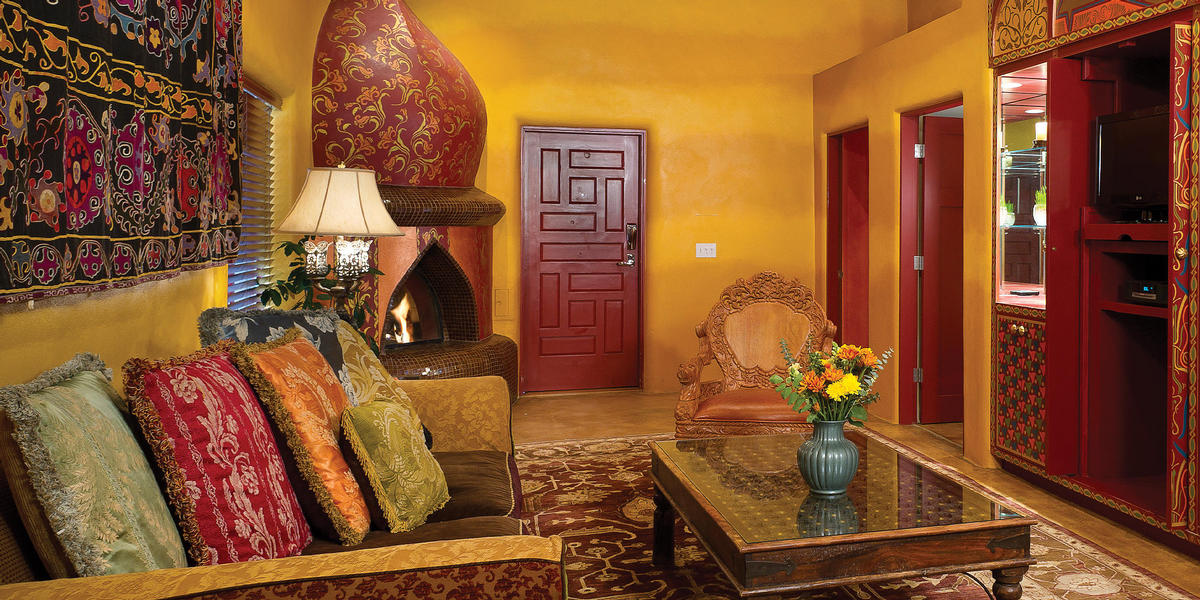 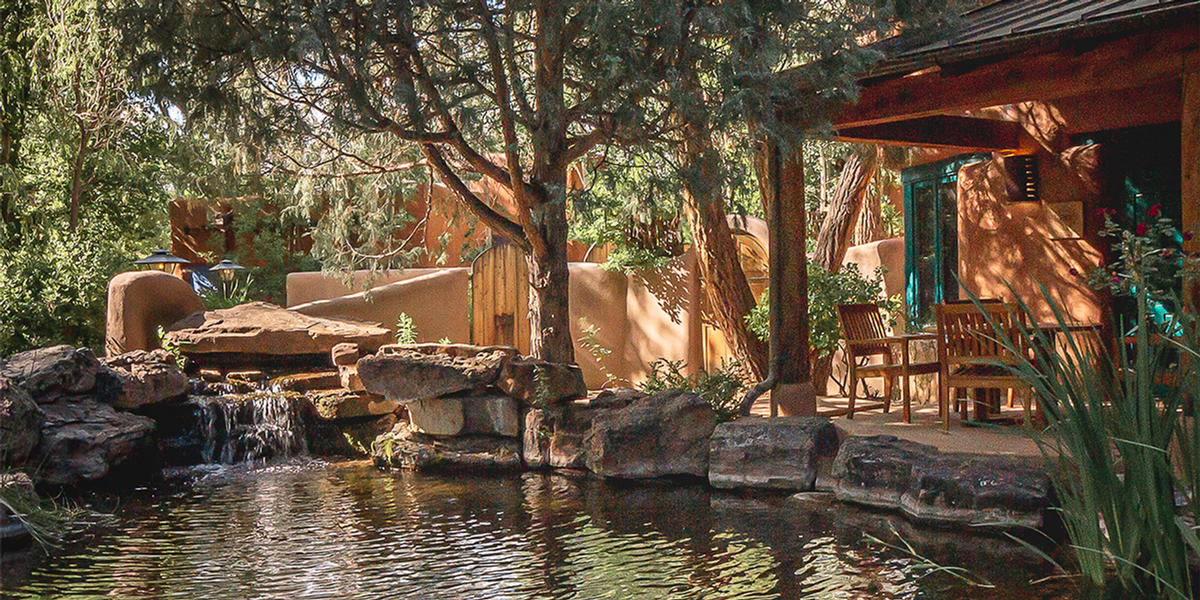 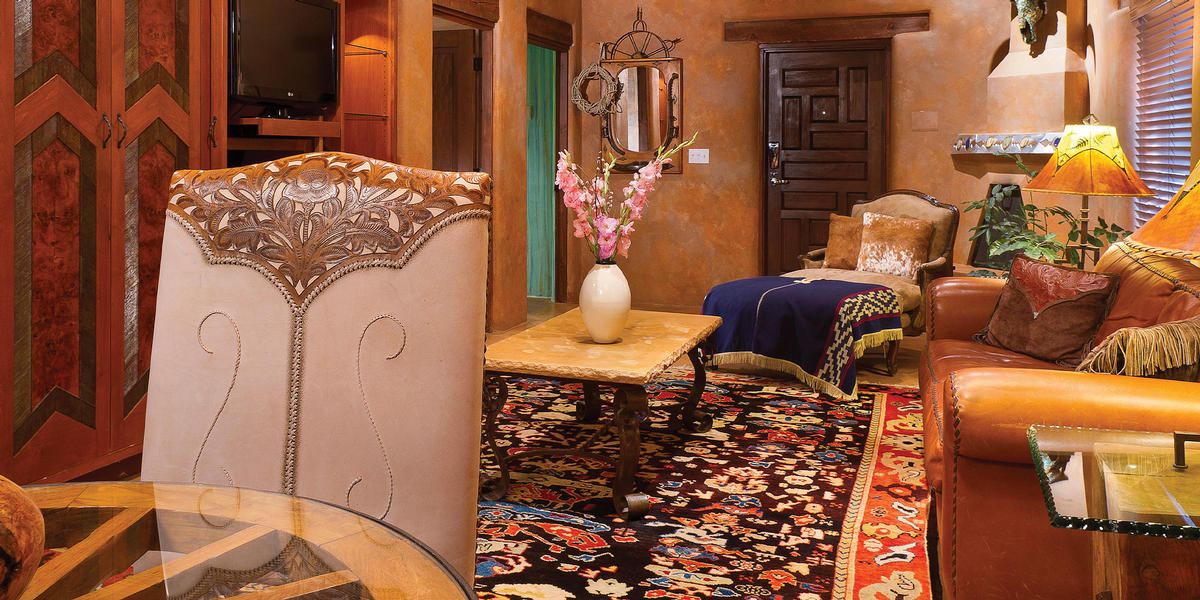 Leather furniture blends with iron and copper pieces resembling the typical rural estancia (farmhouse). For the tango lover, an antique phonograph brings the sensual music of Buenos Aires to the room. From the wagon wheel table to the steer head over the fireplace, the environment is casual like La Pampa, Argentina. The gas–burning pueblo-style fireplace bears a custom-crafted copper and bronze band with wonderfully colored mineral stone inlays by local artist Thom Wheeler.

The back wall of the main bedroom has been finished in hand carved teak wood perfectly offsetting the colors used to paint the room. The second bedroom has been treated with a hand painted finish that resembles softly filtered sunlight and showcases the floor to ceiling gilded floral stenciling. An antique fireplace enclosure has been custom crafted into an elegant headboard. The main living area features a pueblo-style fireplace embellished with hundreds of iridescent mosaic tiles. 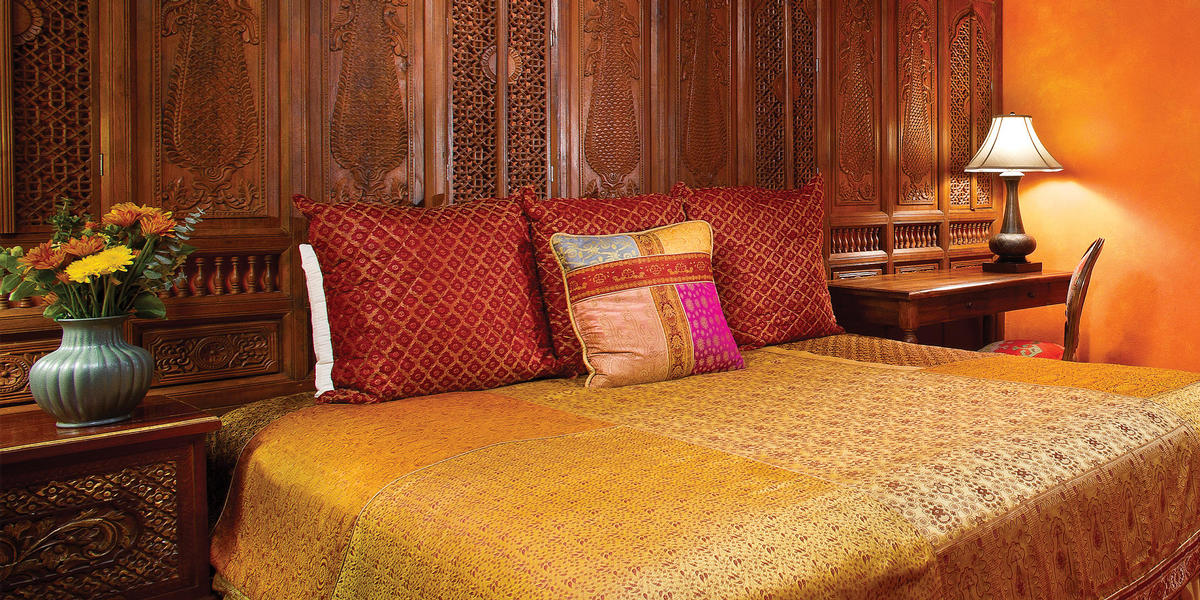 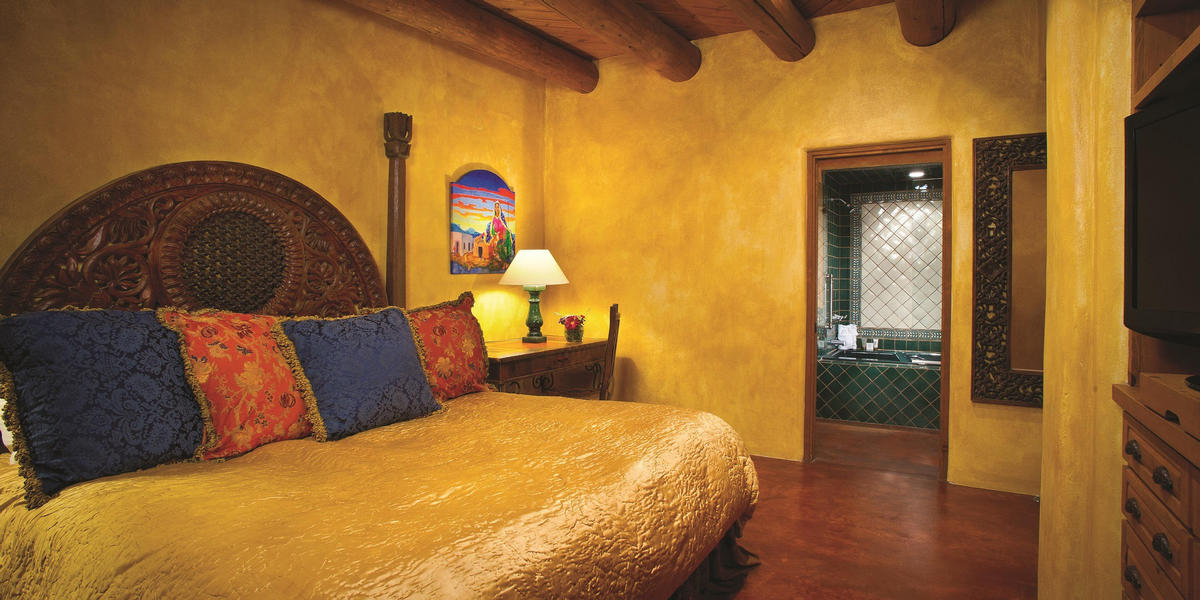 Capture the spirit and culture of our neighbors to the south in this exquisitely designed and decorated casita that captures the vibrancy and drama of Mexico. The two spacious bedrooms in this original suite offer ornately carved wooden king size beds, matching furniture, and two well appointed bathrooms.

The walls and ceiling panels of the first master bedroom have been designed to highlight the custom made stencil work. The adjoining bathroom has color washed walls to replicate the vibrant colors so often seen in Morocco. The shower enclosure was built from an antique gate and each carved panel is a different Moroccan design, hand painted. The second bathroom’s walls were also stenciled in a traditional Moroccan manner with a tiled look. 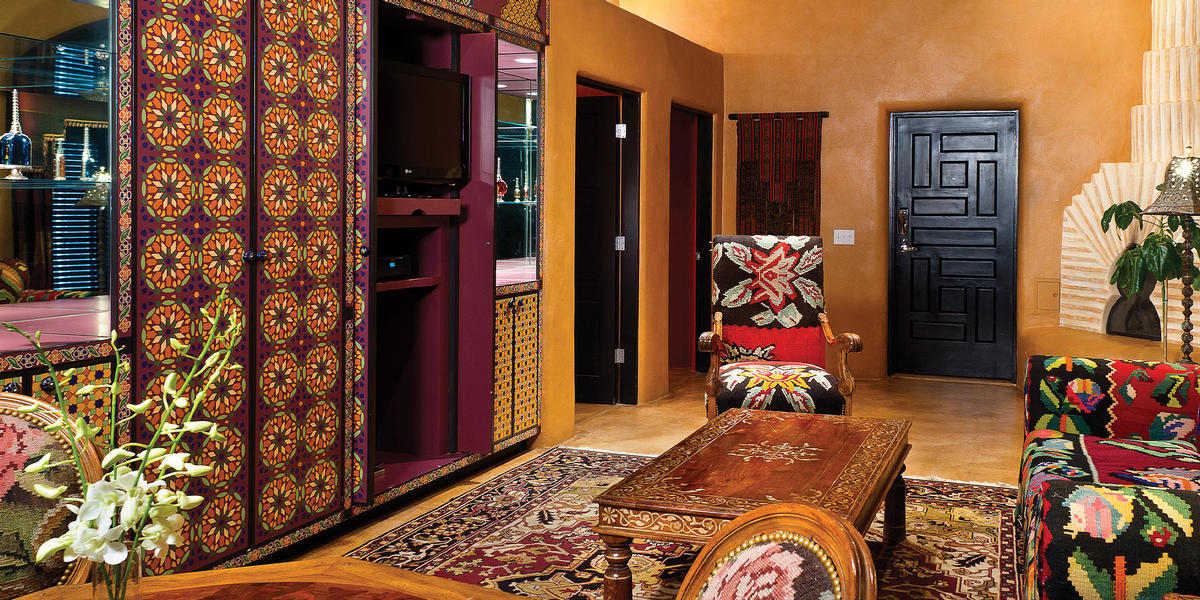 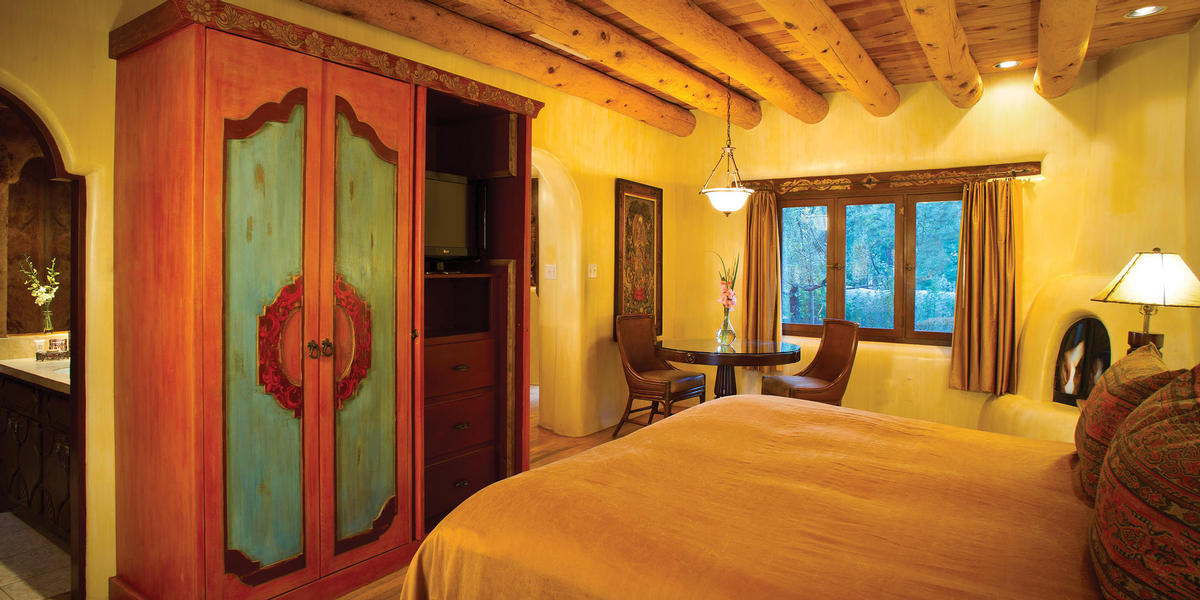 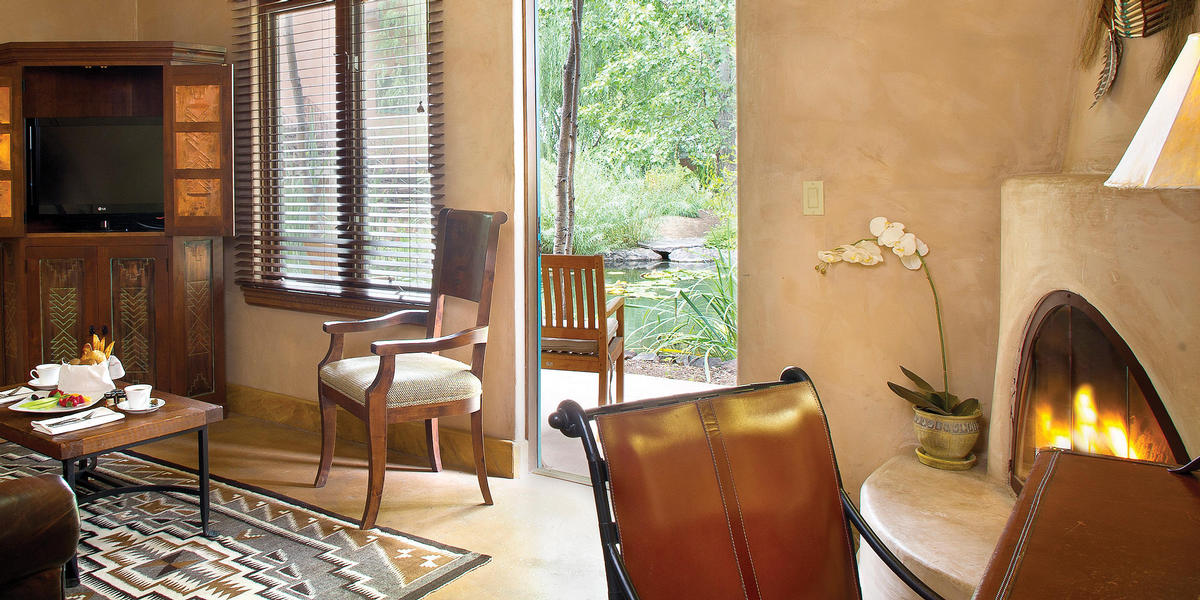 Chief Seattle (1776-1866) inspired this spacious 575 square-foot accommodation. As chief of the Sugwamish and Duwarnish tribe of the Pacific Northwest, he advocated a peaceful coexistence with the settlers. A famous orator, his speeches are still studied today. Seattle in the state of Washington is named after him.

Cochise (1823-1874) inspired this spacious 575 square-foot accommodation. Following decades of Mexican territorial wars, this Chiricahua Apache chief led the resistance to settlers’ incursions into the U.S Southwest from 1861 to 1870. As a leader of one of the last Apache bands to surrender, he is considered one of the most aggressive Native American leaders. By 1872 he agreed to move to the reservation. The framed photograph in the living room is of Jordan Torres who is a member of the Mescalero Apache nation and a great grandson of Cochise and Naiche.

Geronimo (1829-1909) inspired this spacious 575 square-foot accommodation. In the 1870s and 1880’s, this Chiricahua Apache chief led the revolt of 4,000 Apaches forcibly removed by U.S authorities to a barren Arizona reservation. Following Geronimo’s arrest and hard labor, he was placed on the Fort Sill Reservation in Oklahoma. The framed photograph in the living room is Houston Geronimo who is a member of the Mescalero Apache nation and of Oliver Enjady, a Mescalero Apache and great grandson of Perico (White Horse) who was Geronimo’s messenger.

Handsome Lake (c. 1735-1815} inspired this spacious 575 square-foot accommodation. Handsome lake was the Seneca Tribe half-brother of Corn planter, and most noted as a prophet who developed a religion called Gai’wiio or Good Message, which combined elements of Christian and Native beliefs. After Handsome Lake’s death in 1815, his teachings continued to spread and become the foundation for the Longhouse religion. Still a vital force, this religion plays an important role in preserving the Iroquois’ sacred and cultural heritage.

Jim Thorpe, wathohuk, “Bright Path” (c. 1877-1953) inspired this spacious 575 square-foot accommodation. Jim Thorpe was from Suak and Fox tribe and is generally regarded as one of the greatest American athletes of the 20th century. In 1912, he won the Olympic Decathlon and pentathlon, and from 1919 to 1926 he was a professional football star. He was the first president of what was to become the National Football league as well as being a recipient of ABC's Wide World of Sports Athlete of the Century award.

Chief Joseph, Hinmahtooyahlatlekt (1840-1904) inspired this spacious 575-square-foot accommodation. Chef Joseph was from the Wallowa Band of the Nez Perce. He is best remembered for leading a three-month, 1,000-mile journey of resistance against the United States Government during an 1877 territorial war to escape this tribe’s forced settlement to an Idaho reservation. He is credited with the famous quote, “I will fight no more forever."

Oren Lyons, born in 1930, professor at the State University of New York, author and international figure, Oren Lyons was raised in the traditional ways of life of the Seneca and Onondoga reservations. In 1982, he helped establish the United Nations Working Group on Indigenous Populations, where he participated in the Indigenous Peoples Conference: an international forum supported by the U.N. He is the Faithkeeper of the Turtle Clan of the Onondoga Nation in upstate New York. The Onondoga Nation is one of the six nations of the Haudenosaunee confederation of nations, also called Iroquis Confederation of nations or League of Six Nations. Chief Lyons received the Audubon Medal in 1993 in recognition for his individual achievement in the field of conservation and environmental protection.

Osceola, William Powell, (1804-1838) inspired this spacious 575 square-foot accommodation. Elegant, handsome, and passionate, Osceola masterminded successful battles against five baffled U.S. generals and stood as a national manifestation of the Seminoles strong reputation for non-surrender. His capture, under a controversial flag of truce offered by Gen. Thomas Jessup, remains one of the blackest marks in American military history. At the time of his death, Osceola was among the most famous Native Americans.

Quanah Parker (c. 1844-1911) inspired this spacious 575 square-foot accommodation. Quanah Parker was the son of Peta Nocona and Cynthia Ann Parker, and the last chief of the Quahadi band of the Comanche tribe in Texas. He led raids against the United States Government to protest being forced to live on a reservation. After his tribe finally entered a reservation in 1875, he went on to learn European ways and improved his English through his mother's side of the family. He became one of the wealthiest Native Americans in the United States. The framed photograph in the living room is of Jill Parker, a member of the Comanche nation and Quanah Parker’s great-great granddaughter.

Red Cloud (c. 1822-1909) inspired this spacious 575 square-foot accommodation. As the principal chief of the Oglala Teton Dakota (Sioux), he led both the Sioux and Cheyenne tribes against the development of the Bozeman Trail to Montana’s goldfields from 1865-1867. The United States agreed to halt the route following the Fort Laramie Treaty in 1868, and he settled in the Red Cloud Agency in Nebraska, the state of his birth.

Red Jacket, Sagoyewatha (c. 1758-1830) inspired this spacious 575 square-foot accommodation. A Seneca chief who at first urged the continuance of hostilities against the settlers, he later attempted to make peace with the United States as a mediator by influencing his people to support them. He wore a British red coat as an ally of the English in the American Revolution, thus creating his English name. The framed photograph in the living room is of Pepper Mills, great-great-great granddaughter of Red Jacket, and a Navajo/Ute Mountain Ute.

Sacagawea (c. 1788-1812) inspired this spacious 575 square-foot accommodation. At age 12, this little girl from the Shoshone tribe was captured by a Hidatsa war party and taken to live in their camp. She was later sold to a French-Canadian fur trader before serving as an Indian interpreter for the Lewis and Clark expedition in 1804-1805. The explorers honored her for incredible courage and resilience. She died at a young age due to an illness aggravated by childbirth.

Sequoyah (c.1770-1843) inspired this spacious 575 square-foot accommodation. Sequoyah was a Cherokee Tslagi warrior and a statesman whose people lived in East Tennessee and the Carolinas before his tribe’s horrific relocation in Oklahoma - known today as the “Trail of Tears” - to a reservation. He was a great scholar who developed the written Cherokee language.

Leon Shenandoah (c. 1915-1996) inspired this spacious 575 square-foot accommodation. Leon Shenandoah was a chief of the Onondaga Nation and held the title of Tadadaho, or Firekeeper, of the six nations confederacy. A wisdom-keeper, he advocated peace not only between humans and nations, but also with nature. Before his death, in answer to the question, “What is the greatest power?” he was silent a few moments, and then replied slowly, “The greatest power is the creator. But if you want to know the greatest strength, that is gentleness.”

Sitting Bull, (c. 1831-1890) inspired this spacious 575 square-foot accommodation. A Teton Sioux chief, Sitting Bull united his people into Canada but the near-extermination of the buffalo herds drove them to surrender. From 1883, he lived on Indian Agency lands, and in 1885, he traveled with Buffalo Bill’s Wild West Show. He was arrested during the Ghost Dance movement and killed during an attempt to rescue him. The framed photograph in the living room is of Kevin Haywahe, an Assiniboine and great-great-great grandson of Sitting Bull. 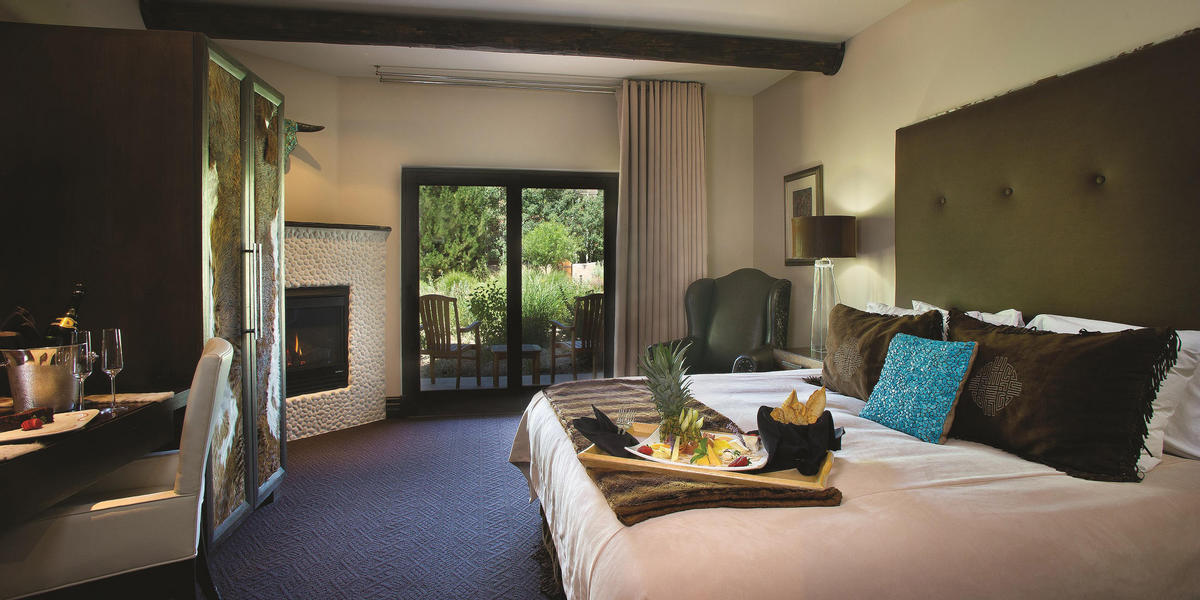 Furnished by local Taoseño artists, you’ll enjoy this immersion into Southwestern culture and discover Taos via the style and aesthetics of its artists. 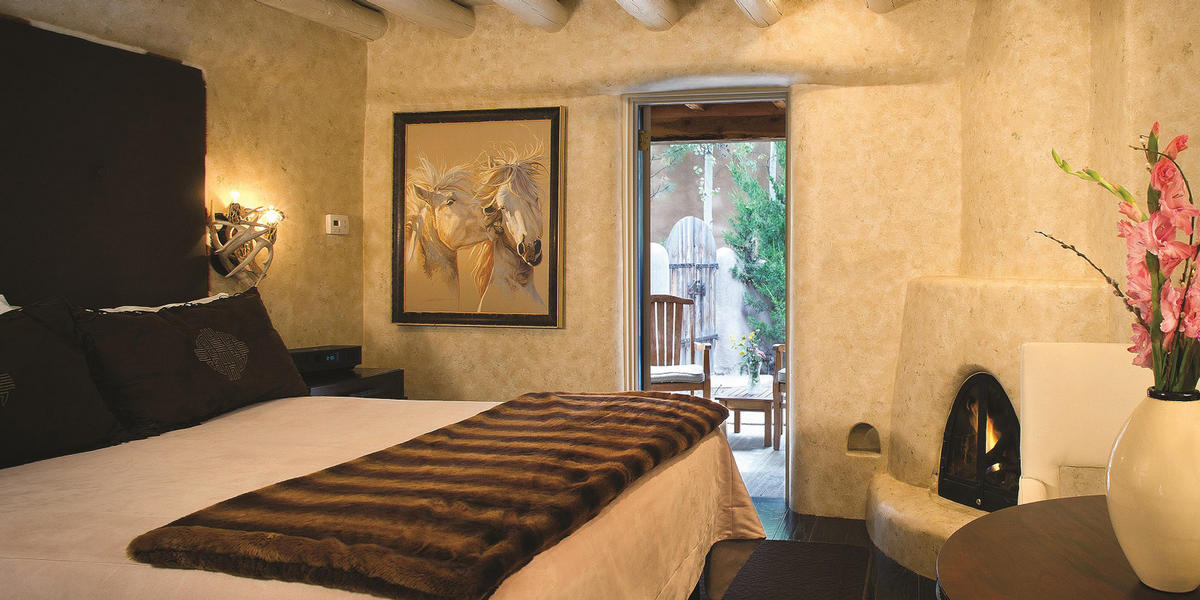